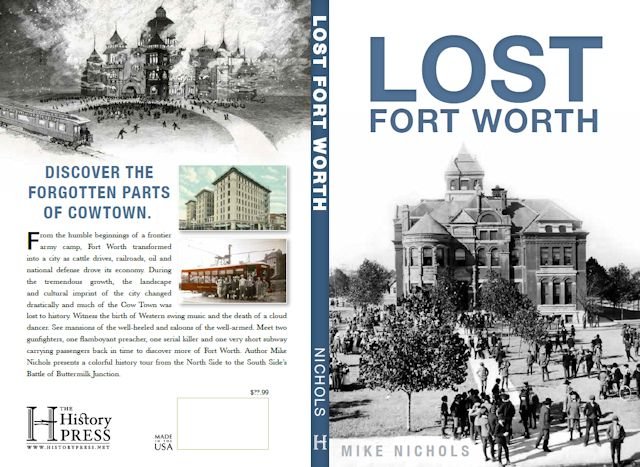 Fort Worth began as a frontier Army camp and grew into a city as cattle drives, railroads, the stockyards and packing plants, oil, and national defense drove its economy. Join author Mike Nichols on a stroll down Memory Lane from the cattle pens on the North Side to the Battle of Buttermilk Junction on the South Side, from Randol’s mill on the East Side to the Army’s Camp Bowie on the West Side. Witness the birth of Western swing music and the death of a cloud dancer. See mansions of the well-heeled and saloons of the well-armed. Meet Butch Cassidy and the Sundance Kid, Clyde Barrow and Rube Burrow, Sisters of Charity and ladies of the evening. Along the way you’ll also pass four trolley parks, three World War I airfields, two gunfighters, one flamboyant preacher, one serial killer, and one very short subway. Hop aboard it and travel back in time to Lost Fort Worth.

About the Header: A terracotta longhorn on the West Lancaster Avenue Bridge (1938) over the Trinity River.